But in addition to the reduction in caloric expenditure due solely to weight loss, there is another component called the 'adaptive component'. It's existence has been debated over the years with some studies saying it exists and others not. So what is an adaptive component anyway? In this context it means that the body has reduced (in the case of dieting) or increased (in the case of overeating) caloric expenditure more than you'd expect based on the change in bodyweight.

That is, say that a reduction in weight of 10 lbs would be predicted to lower daily calorie expenditure by 150 calories, but when you measure it, the reduction is actually 250 calories. That extra

100 calories/day reduction is the adaptive component. I want to mention that the adaptive metabolic rate is never sufficient to completely eliminate weight loss, it simply reduces the effective daily deficit (which may slow weight loss). Perhaps the largest reduction in metabolic rate recorded is on the order of 30% (and that was seen in relatively lean men who underwent semi-starvation for months). Considering that the daily deficit on the crash diet will be 50% or more of daily energy expenditure, the slowing of metabolic rate will not be able to eliminate weight/fat loss, only slow it.

I should mention that the adaptive component tends to be quite variable and several factors affect it. One is bodyfatness, generally the fatter you are, the less of a problem it is. Tangentially, this probably explains why some studies don't find an adaptive component, they are looking at extremely obese individuals. Gender also has an effect, women's bodies tend to fight back harder and faster than men's (see my booklet Bromocriptine for more details on this), dropping metabolic rate more than men (this is one of several reasons men typically lose weight and fat faster than women). There is also good old genetic variability, some people's bodies seem to fight back harder and faster than others. Generally, the people who gain weight the easiest lose it the slowest and vice versa.

And what causes the adaptive component? Primarily the hormones I mentioned above. Actually, not so much those hormones as the systems that they control such as nervous system output, thyroid hormone, and a couple of others. Although you've probably read that levels of thyroid hormone are the primary regulator of metabolic rate, this is an altogether simplistic explanation (even for this booklet). Rather it's an integrated response to decreased nervous system output (which is often below normal in obesity to begin with, a metabolic 'defect' if you will), thyroid hormone (which may be low to begin with), leptin, insulin and others. When you diet, it simply turns out that all of those systems decrease below normal, causing the adaptive decrease in metabolic rate.

However, the different systems (the main ones I'm going to focus on here are nervous system output and thyroid) have different effects over different time frames. Thyroid, for example, is a fairly long-term hormone. Its effects can be seen for 3-4 weeks before anything major changes (I should note that thyroid also has somewhat minor, short-term effects on metabolic rate). In the short-term, a few days to a few weeks of dieting, the main system that is decreasing metabolic rate is a decrease in sympathetic nervous system (SNS) output. In fact, within 3-4 days of extreme dieting, SNS output can and will drop, lowering metabolic rate slightly. As well, SNS output and thyroid levels are synergistic, they make each other work better; the drop in SNS output means that thyroid hormones won't have as great an effect as you'd expect.

Since the crash diet is mostly short-term only (the only people who might stay on it longer than a few weeks are category 3 dieters for whom the adaptive component isn't as big of a deal in the first place), the only system we are going to concern ourselves with is SNS output. Since, short of using thyroid drugs (or hoping that one of the thyroid boosting supplements on the market actually works) you can't do anything about thyroid anyhow (well, see next chapter), there's nothing to be gained worrying about it.

Are you looking to lose weight or even just tone up? What is stopping you from having the body you want and help you feel great at the same time? I created Weight Loss All-Star for all those wanting to lose weight, and keep the weight off. I know how hard it is to do diets and stick with them, and get the motivation to get up and exercise. 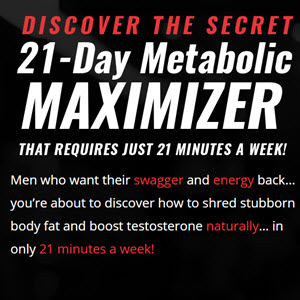 How To Increase Metabolism