What Did The Legendary George Hackenschmidt Have To

George Hackenschmidt was a strongman, professional wrestler and author from the late 1800's and early 1900's.

The "Russian Lion", as he was nicknamed, was a legend for his wrestling abilities and weight lifting feats.

In his book, The Way to Live,

Hackenschmidt laid out his formula for fitness, health and physique.

Even in the early 1900's, Hackenschmidt showed concern for the decline in physical health of men and women... despite the progress of civilization, medical science and sanitary conditions.

He wrote, "The reason is not far to seek. There is an urban migration, a vast increase in the number of those who are engaged in indoor and sedentary occupation, and only here and there is any attempt made to combat the consequent unhealthy conditions of life with the only satisfactory weapon. Rational Physical Exercise."

For Hackenschmidt, rational physical exercise using dumbbells and barbells to improve strength was absolutely necessary for health... because "health can never be divorced from strength."

So, what does this strong advocate of weight lifting have to do with bodyweight calisthenics exercise?

According to Hackenschmidt, developing great strength was dependant on lifting heavy weights, but the exerciser "should of course combine these exercises with skipping, running, jumping and gymnastics of every description in order to similarly develop his activity and agility."

As a matter of fact, he dedicates an entire chapter to exercises where dumbbells and barbells are not used... entitled Exercises Without Weights.

While he contends exercising with weights is needed for great strength... exercises without weights "if done conscientiously, develop a fair average physique, as well as a sound, all-round physical fitness - in other words, a sound and healthy constitution."

Furthermore, Hackenschmidt acknowledges since not everyone can "safely enter straight away on a course of weight-lifting exercises, and of exercises with weights, he will be well advised if he devotes at least two or three weeks to these exercises without weights, and further to include a fair selection of them in his programme of daily exercise with weights."

In other words, bodyweight calisthenics exercise are the logical starting point for a fitness program... as well as an integral part of a fitness program including other methods of training, like dumbbells and barbells.

While the language of the previous quotes is sexist (sorry ladies), the message is important for both men and women... Bodyweight calisthenics exercise should be part of your over-all fitness plan.

Fitting Exercise Into A Busy Schedule

Fit exercise into your busy schedule? Thats as absurd as saying that there are eight days in a week! First, youve never exercised before or engaged regularly in a sport second, youve never been into the fitness crowd and have had meager time for such pursuits, and third, youre far too busy to even think of exercise. 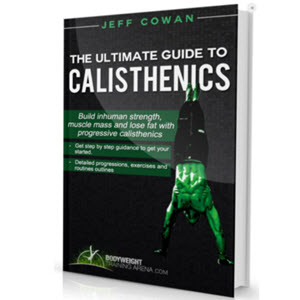